If we cannot base our idea of God on some supernatural revelation or miracle then we must base it on the natural world. In this chapter we introduce several philosophical concepts through which we can view the natural world. Then we extrapolate from those concepts to a concept of God. (The reader unacquainted with, or uninterested in, philosophy may at first find this chapter dry and difficult, and may wish to read it more than once. With some familiarity, the concepts become simple and obvious.)

We find in the universe a multitude of things, most of which possess components, parts. Even water, apparently pure and simple, possesses parts: one part oxygen and two parts hydrogen. Thus, we might begin by analyzing component things, i.e., things that possess parts. But "thing" implies a physical object while "entity" suggests anything (a table, a word, the act of spinning, etc.). So we begin with component entities.


Component entity (preliminary)
An entity that has components, parts. For instance, a table has parts: a top and four legs. A printed word has parts: its letters. A water molecule has parts: one atom of oxygen and two of hydrogen.

Open-ended question: (A question we won't pursue further) Do concepts such as, for example, number, have parts? We might argue that "number" implicitly contains the concepts of similarity and dissimilarity. For example, recognizing four apples depends on similarity (we recognize them all as apples) and dissimilarity (we recognize them as distinct from each other). If we had a comprehensive taxonomy of concepts we might find a hierarchy of concepts, with a single concept at the top. Or perhaps not.

The existence of a component entity may require more than the existence of its parts: its parts may also need to maintain the proper relation to each other. For instance, we need more than parts for a table to exist: the parts must maintain a certain relation. If we disassemble the table, then its parts still exist but the table does not. Just as if we disassembled an automobile and placed all its parts in a heap, we'd no longer have an automobile. The table and the automobile exist only while their parts exist and maintain a certain relation.

To take another illustration, a word exists only while its components, its letters, maintain the proper relation. Consider the English word "are". If we alter the relation among components, then "are" disappears and "ear" appears.


Relative existence
If an entity exists only while its parts maintain a certain relation to each other, we say the entity possesses relative existence: its existence depends on one or more relations.

Does every component entity possess relative existence? Apparently. A table exists only when its parts maintain a specific relation—four legs attached to the top, one at each corner, all four pointing down. A heap of sand exists only when its grains are in close proximity, a vague relation but a relation nonetheless. If we separate each grain by a meter, then the heap ceases to exist.

So it does seem that component entity implies relative existence. So we amend our definition.


Act
"Motion" applies to spinning, running, jumping, etc. But "act" may indicate a relation statically maintained through time. For instance, we may think of a fist as a thing, but we more accurately think of it as an act, the act of holding our thumb, four fingers and palm in a certain way. For when we open our hand, "it" (i.e., the fist) vanishes. Where did "it" go? Nowhere, of course, because an act doesn't go anywhere when it stops. It simply ceases to exist, in contrast to matter, which obeys a conservation law.

Just as a fist consists of thumb, fingers and palm maintaining a certain relation, we may recognize the table as a top and four legs maintaining a certain relation (that is, a top and four legs, each attached to a different corner, each pointing down). Thus, we may widen our concept of act to apply to components continuously in the act of sustaining the proper relation among themselves. Thinking of a fist as an act of the hand may seem natural, but thinking of a table as components in the act of maintaining a proper relation may seem odd at first.

For example, we can think of a whirlpool as a component entity "made" of water in a certain relation. Or we might think of it as a motion of its components, its water molecules. But "flow" seems the best characterization because the components—i.e., molecules of water—seem secondary to a whirlpool. Indeed, any liquid with a viscosity near water could create a whirlpool. Just as we can focus on the spinning while disregarding the thing in spin, we can focus on the flow and disregard the things flowing.

As another example, we can picture a candle flame as a continuous flow of candle wax drawn up the wick and transformed into energy and gas by burning. Other examples include a tornado, the spray of water in a fountain, and the human body (because food, water, and air continually enter, remain for a while, and eventually leave the body).

We discuss two more examples of a flow.

First example: the Greek historian Plutarch tells of a famous ship, the ship of Theseus, preserved over the years by replacing old, decayed wood with new. Plutarch wondered if, after all the wood had been replaced, the ship could justly be called the same ship. Later, the philosopher Thomas Hobbes introduced a complication: what if someone saved the original decayed wood and eventually reassembled the original ship? Which ship, asked Hobbes, should we consider the true ship of Theseus? Such questions concern identity, which we discuss in a later chapter. For now, we merely note we can think of the ship as a flow, where new timbers slowly but continuously replace old. (Of course, we can think of it as a component entity, too, with its present timbers in proper relation, constituting a ship.)

Second example: scholars founded the University of Cambridge in the year 1209. So we might say the University has existed since 1209. But precisely what thing or things has endured throughout the centuries? Not any particular professor, or student, or building. (Even if some building has endured since 1209 we wouldn't call that building itself "the University of Cambridge".) Rather, a flow has endured, a whirlpool, where professors, students, administrators, buildings, textbooks and other materials, enter, remain for a while, and eventually leave.

Motions and flows may possess properties quite different from any property of the object(s) involved. For instance, the property of "centuries-old university" applies to the University of Cambridge but not to any of its professors, students, or administrators.

Alternatively, we may imagine a building. On the top floor, we find tables, automobiles, and similar items. On the floor beneath, we find components, such as table legs and tops, engines and transmissions. Beneath that, we find the wood, metal, plastic, etc., that comprise table legs and tops, automobile engines and transmissions. Next, we find atoms and molecules; on the next floor, protons, neutrons and electrons; and next, quarks. What type of concepts might we find on the ground level?


Absolute existence
The concept of absolute existence—an entity that possesses its existence independent of any relation—corresponds to relative existence. The table's top and legs must maintain a certain relation for a table to exist. Oxygen and hydrogen atoms must maintain a certain relation for water molecules to exist. (The two hydrogen atoms attach to the central oxygen atom in a water molecule. Let's represent that as H-O-H. If chemical laws allowed hydrogen and oxygen to attach to a central hydrogen atom like this H-H-O, then the molecule might not have the properties of water.) Do we ever reach anything that possesses existence independent of any relation?

Open-ended question: some concepts imply relation. For instance, "uncle" necessarily implies a man related to a niece or nephew. But we may regard other concepts, "blue" for instance, as simple entities, lacking any parts. Should we consider some concepts as having absolute existence? Are concepts mind-dependent or do they exist independently?


Independent existence
We mean an entity that possesses its existence independent of any other entity. This concept resembles the concept of absolute existence. 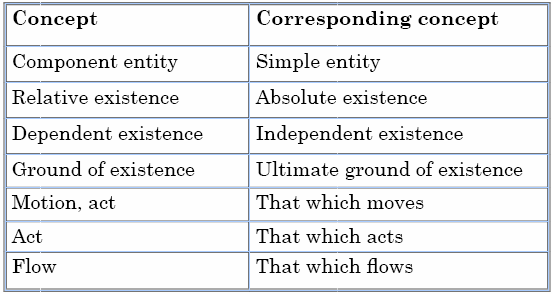