Our place in the universe

We once thought of the stars as tiny points of light in the "dome" of heaven. We saw the sun and stars revolving around us, and came to the natural conclusion the universe revolves around us, too. We saw we had abilities—in tool-making, thought, language, etc.—that exceeded those of other animals. The facts seemed to say we ranked above all other animals, indeed, constituted the "pinnacle of creation". We found the idea that God made it all for our benefit flattering.

We've learned much since then. What do the facts say today? We'll review the facts from the big bang till now, using the current estimate of the time since the big bang as 13.7 billion years.

At about 1 second after the big bang, energy condenses to form fundamental particles, such as electrons, photons, and quarks, which in turn form protons and neutrons.

At about 3 seconds, protons and neutrons form nuclei of hydrogen, helium and lithium

To put times in perspective, we add an hour-minute column, squeezing the time from the big bang until now into a 24-hour day, the "cosmic day".

About nine billion years after the big bang, between lunch and dinner of the cosmic day, our sun begins to form, with its planets. Astronomers classify our sun as a G-type main-sequence star, also known as a yellow dwarf. By some estimates, the number of stars in the known universe (on the order of 2*101023) exceeds the number of grains of sand on the beaches of Earth (on the order of 1*101022).

After Earth acquires an atmosphere that blocks the ultraviolet sunlight which kills living cells, life develops soon. But primates and humans do not appear until almost midnight. 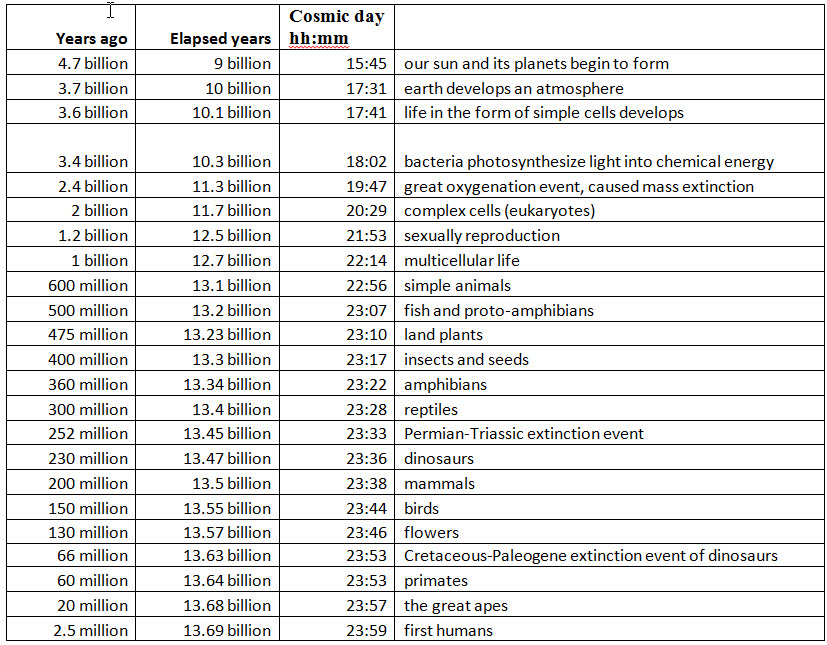 Humanity has existed for less than 0.02% of the time since the big bang. In terms of the cosmic day, we arrived 16 seconds ago (2.5 million years ago). All our historical records describe events which occurred within the last second. 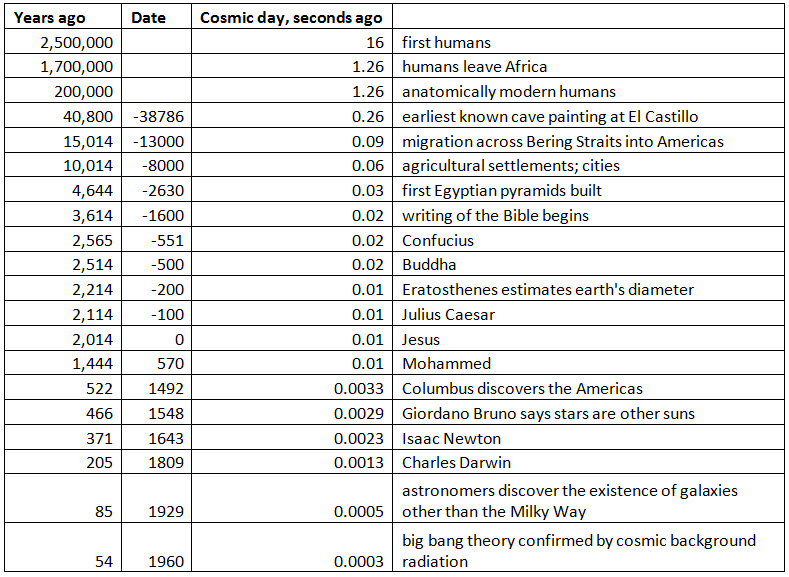 We know that after the Earth acquired a life-protecting atmosphere, life arose a mere 10 minutes later in the cosmic day. It seems probable the universe abounds with life, even as we know the Earth does. If only one star in a billion has a life-bearing planet, the number of planets with life would still exceed a billion.

And we see life persisting and adapting even after several worldwide extinction events that occurred on Earth in the past. We see life manifesting in myriad forms, with our form not arriving until a mere 16 seconds from midnight on the cosmic day. And rather than a special "pinnacle of creation", we see our bodies made of the commonest elements in the universe, built on a DNA backbone, like all other life on Earth, surpassing other forms only in our mental abilities. And we see Earth dominated by dinosaurs for 165 million years (230 to 65 million years ago), while we have been here only 2.5 million years.

Given the evidence, we may reasonably conclude we number as one of a gigantic number of life forms, which the universe has spawned and continues to spawn, on Earth and elsewhere. It seems the universe would not miss us if Earth and all life on it somehow perished.

Yet some theists find the flattering, comforting "pinnacle of creation" view of humanity difficult to abandon, especially because that view has found its way into scripture. So some theists maintain it purely on dogmatic grounds, and reject science, evolution in particular, and insist on the accuracy of scripture. Other theists use "designer arguments" to deny evolution and deny, by implication, the view that the universe used purely natural processes to create humanity. Designer arguments date from, at least, the eighteenth century when clergyman William Paley in his book Natural Theology argued that just as the complexity of a wristwatch demands a designer the complexity of the human body demands a designer, i.e., God. Paley's famous "watchmaker" argument lost much of its force after Charles Darwin's theory of evolution explained apparent design in terms of random mutation and natural selection.

Scientists widely reject the idea of irreducible complexity and offer explanations as to how the bacteria flagellum might have evolved. Yet even if true, the irreducible complexity argument would prove an Intelligent Designer but not a benevolent Designer. That is, if the Designer designed the bacteria flagellum then the Designer also designed the bubonic plague bacterium which to date has killed an estimate 200 million people, including perhaps half of Europe a few centuries ago, and the malaria protozoan which even today kills a child somewhere in the world every sixty seconds.

The "fine-tuning" argument instantiates yet another version of the watchmaker argument. Theists claim, correctly, if certain physical constants had different values, then life could not exist on Earth. But they then make the added claim that if those values differed slightly, almost infinitesimally, life couldn't exist and thus a Fine Tuner, i.e., a Designer, must exist.

Of course, some theists accept evolution but choose to see God's "guiding hand" in it. It appears an inflated view of humanity provides a hard-to-resist measure of psychological comfort.